As frequently and most aptly stated by panda keepers at the San Diego, CA Zoo, I too have been having a love affair with the Giant Panda for some time now. Not since 1987 as in the case of the San Diego Zoo, but since 1999 when Hua Mei, born in San Diego of parents Bai Yun and Shi Shi, received the title of “first panda to be born and survive to adulthood in the U.S.” Subsequent to that momentous achievement, I have been following all the breeding efforts, births and other news worthy events on the websites of all four zoos in the U.S. that have the great privilege to work with such an admired and magical animal.

The Panda web cams that each of the zoos maintain are a great window into the world of pandas. I watch the cams religiously and have followed the births and step by step growth of Mei Sheng and Su Lin in San Diego, Tai Shan in Washington, DC, the birth of Lun Lun’s first cub Mei Lan “Atlanta’s Beauty” and the most recent birth of Bai Yun’s fourth cub born in San Diego.”

The Panda News updates that each of the websites offer is also a great way to track the milestones of breeding efforts and panda events. When folks ask me what it is I like so much about pandas, it is sometimes hard to describe. I believe that people are born with a love for animals; it is not something that can be learned or mimicked. Obviously, I have a great love of all animals but my love for pandas is more like a reverence. Their human-like behaviors especially with regard to the female’s maternal instincts have always fascinated me. To watch the relationship form between a very large and gentle mother and a very tiny delicate baby to me represents a bond that I have never witnessed in any other animal species. The antics displayed by young cubs is also quite amusing and those that love pandas can watch and be entertained by these small black and white bears for hours.

Based on their dwindling numbers in the wild, the Giant Panda is listed as an endangered species and this has raised my awareness of the need for strong conservation efforts to ensure their future survival. With the support of Panda International and private donors the breeding centers in China as well as zoos around the world have worked miracles with pandas in captivity to increase their numbers and to begin to change the destiny of this grass eating bear.

Never in a million years did I ever expect to witness, let alone participate, in this vast conservation effort. This is how it happened:

For our summer vacation this past July, my husband Richard and I made the long sojourn to the mountains of China to the Conservation and Research Center for the Giant Panda, Wolong Nature Reserve, Sichuan Province that is home to about 70 Giant Pandas. Searching the internet Richard had stumbled upon a volunteer program being offered by the Center and signed us up for 5 days duty.

The mountain road to the reserve was under construction and the trip was long, dirty and at times very dangerous. Not knowing what to expect I wondered if maybe we had made a mistake in taking on this challenge. That was until we made our entrance into the panda reserve and were met almost immediately by an adult Giant Panda standing upright in her enclosure and gazing over at us as though to welcome us to her home. We later nicknamed this panda “the poser” since it became obvious to us that she really enjoyed having an audience and would take on different human-like poses to the enchantment of all those watching.

From that moment the experience grew into one of wonder (and hard work) as we were assigned to care for seven 2-year old pandas being raised together in the same enclosure. Much to our surprise and amazement two of the cubs in our care were the second set of twins born to Hua Mei at the Center in 2005. Being responsible for the care of these twins, Wei Wei and Ting Ting seemed to bring full circle the boundless conservation efforts on-going in China and the U.S. and it gave us a great feeling of satisfaction to be connected to this effort even if only for a brief moment in time. 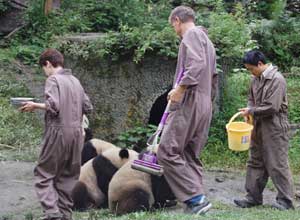 Our volunteer tasks at the Center initially began with the basic chores of cleaning the indoor and outdoor enclosures and gathering and distributing fresh bamboo but as we began to gain the trust of our master and teacher we were permitted to feed the pandas their special panda cakes at several different intervals during the day but only through the bars of their indoor enclosure.

By mid-week our master allowed us to enter the outside enclosure area to feed the pandas their panda cakes as well as their daily bowls of powdered milk and also to assist him in coaxing down some of our more adventurous charges out of the tree tops. It was a great honor for us to have been trusted to work side by side with our master caring for the 2-year olds and the fact that the pandas had even begun to recognize us was the greatest gift of all.

As our final day for volunteering approached it was with mixed emotions that we were to bid farewell, being a bit homesick but at the same time not wanting this incredible journey to end. So I say to those of you reading this newsletter, if you find yourself having a love affair with the Giant Panda consider taking the great leap into their world by visiting the Wolong Reserve and volunteering as a panda keeper. I can assure you that as a caregiver to the world’s most treasured animals you will never feel more gratified.