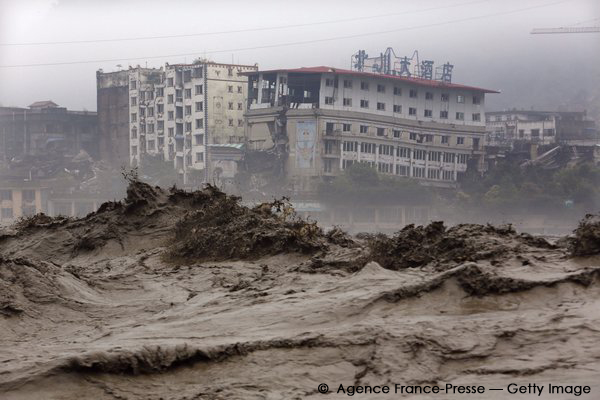 The rainstorms that flooded large areas of southwest China in the Sichuan Province in the last weeks are said to be the worst in five decades. Flood waters washed out bridges, setting off a landslide that buried dozens of people and destroyed a memorial to victims of the 2008 earthquake.

The worst damage appeared to be in the city of Dujiangyan and the mountainous areas of Sichuan that include some of China’s most spectacular scenery, and the area’s panda habitat. About 370,000 people and more than 81,000 acres of crops have been affected by the flooding.

Amidst the disaster surrounding them, the pandas and staff members at Wolong and Bifengxia are all unharmed. Flood waters did not leave the centers untouched, however. Keepers rooms, other facilities, and some of the enclosures were damaged and will need many repairs. The borders of some enclosures were completely destroyed when their foundations were washed away.

Wolong and Gengda were the hardest hit. The road to the new Wolong center was terribly damaged and is virtually impassible.  In addition, the third release training enclosure in Hetaoping was completely destroyed. Finally, we learned that the bamboo base in Gengda was washed away.

Although we do not know exactly what the Panda Centers are going to need, we are once again asking for your help to aid in the rebuilding and replanting process.  Please visit our donate now page.

Images of the Flood and Damage