When he was born, he made headlines around the world, not just because he was a giant panda cub, but because he was the first giant panda cub to be born with a harelip. Unfortunately, the external defect and various other internal health problems proved too much for his little body and he died soon after being born. Despite his very brief time here, he left a lasting impression and legacy, at least for me. He changed me and helped me to make a stronger commitment to the cause of the giant panda.

At the time he was born, I’d been following giant pandas news for six years, ever since first discovering Hua Mei on the San Diego Zoo pandacam during her public debut at six months old. Mostly, it had been a “hobby” of collecting print literature about giant pandas, searching online for their pictures, participating in online discussions, and also purchasing panda-related items directly from the zoos that had panda exhibits.

At the time he was born, I had been in a bit of a depression. But when I saw his picture, I knew I wanted to be a part of the love and the care that would help him overcome his health problems. I went to the Pandas International website to look up information about adopting a giant panda from Wolong. After various email exchanges with director Suzanne Braden, I received the good news that my application to adopt this little cub with the harelip had been approved. Sadly, within weeks, I received news that he’d passed away. (Note – it was only recently that I learned he died within 3 days of being born; due to the irregularity of news coming out of Wolong, we weren’t informed until almost a month later.)

In her email telling me the sad news, Suzanne Braden told me he had a younger twin sister, would I like to transfer the adoption to her? My reply was an unhesitating yes.

Fast forward to September 2007. I had come to Wolong Panda Reserve, on a 4-day volunteer trip that would allow me first-hand experience at looking after giant pandas. In addition to my volunteer duties, I would also be meeting my adopted panda daughter, the younger twin sister of the cub born with a harelip.

I’d named her Yoong Ping, in memory of my parents and my niece who’d succumbed to leukemia in March 2006 after a four-year fight. But Yoong Ping’s official name is Feng Yi. Initially, I’d been disappointed my name for her had not been chosen, but was later cheered by the fact that Feng Yi is as good a name for my little panda daughter.

So yes, I met my little darling, Yoong Ping. The date was Wednesday, 12 September 2007. And she bit and scratched me!

Of all the panda cubs born in 2006, I had to choose the most independent and fiercest of them all!

I was warned that she bites and in fact, just the week before, she had scratched and shredded the sleeve of someone’s uniform!

Yes, I was warned but I still wanted to meet her. It came to the point where I said I would be happy just to see her and touch her. Which I did, but I got photos, too.

I remember anxiously waiting the better part of the morning, and then it just happened. I was told to go to the entrance of the kindergarten yard. There, I dipped my pair of volunteer boots into a pan of water, slipped on shoe covers over the boots, put both my arms through the sleeves of a pair of disposable blue coveralls, had the front and back of my hands sprayed and slipped into a pair of disposable gloves. And then I was inside the kindergarten yard.

It had been raining and the ground was muddy and slippery. One of the other giant panda cubs ambled up for a closer look at me, but I paid him little attention; all I wanted was to get to my panda daughter.

I knew exactly where she was — up on her favorite perch at the top of a tree stump. One of the keepers lured her down with a piece of panda bread, which she took in her mouth and promptly turned around to go back up her perch! No can do, missy, come down here, you!

I had other cubs wanting to play with me — one had his paws around my leg — and the one cub I wanted to play with kept trying to get away from me! HRMPHHH!!!!!!!

It was hilarious, I kept trying to get her to stay still and she would just walk off. Eventually, she warmed to me, and even had her paws wrapped around my leg for a brief, precious moment. Unfortunately, it was time to leave the yard, and I did not want to overstay my welcome. 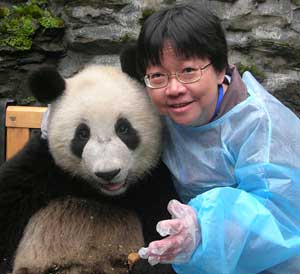 I would’ve loved to have our picture taken together on the bench just outside the door to the kindergarten yard. But her keepers wouldn’t let her out of the yard; they didn’t trust that she would not wander off. So I took my “bench” picture with a friendlier panda cub by the name of Lang Lang, who sat quietly on the bench snacking on the piece of panda bread he’d been given, and letting me hug him, hold his ears and even take a close-up of my hands with his paw. What a difference from my fiercely independent Yoong Ping!

It was only after I’d stripped off the blue coveralls that I saw a scratch on my right arm. Even through the protective clothing, she’d managed to leave a mark — a much-cherished mark — on me. Thinking back to those few minutes when I’d tried to win her attention, I remembered she’d clamped her mouth over my right wrist, but had not actually taken a bite. And I remembered thinking so this must be how it feels when a panda mother picks up her newborn in her mouth.

I have enjoyed my four days in Wolong. I feel very honored to have been there as a visitor, a volunteer and a panda parent. I plan to visit at least once a year from now on, and have started making plans for the next visit, down to where I want to stay in Chengdu enroute to Wolong!