Meet Qizai, a resident of the Shaanxi Rare Wild Animals Rescuing and Raising Research Center in Shanxii Province in Northwest China, and the only brown and white Panda living in captivity.  Qizai was discovered in November of 2009 at the age of two months  in the company of his mother, a black & white Panda. While we are all familiar with our beloved black and white bears, the brown and white panda is rare indeed.  Qizai is only the seventh brown and white panda spotted in the Qinling region over the past 25 years. 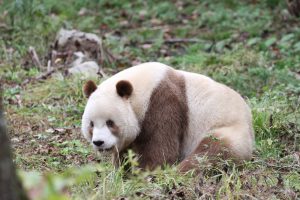 Qizai belongs to a subspecies established as Ailuropoda melanoleuca qinlingensis in 2005.  The subspecies are more commonly referred to as Qinling pandas in reference to the isolated Qinling Mountains where they have been spotted since the mid-1980s.  Qinling pandas differ from the Giant Panda not only in color (although most have the traditional black and white coloring), but also in their slightly smaller skulls and proportionately larger molar teeth. 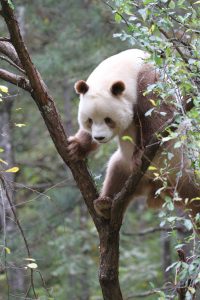 Scientists are still uncertain as to why Qinling Pandas display such unique coloring.

In a recent Nature.com publication, scientists discussed the two most common theories of the origin of the brown panda – genetic factors due to inbreeding and environmental influences.

According to the article, the first recorded brown-and-white panda — a female called Dan-Dan — was discovered in 1985. She was taken into captivity, mated with a black-and-white animal and gave birth to a normal black-and-white male. A few years later, another brown-and-white panda was seen in the wild, together with its black-and-white mother.  “These anecdotal observations strongly suggest the presence of a recessive gene or genes,” says Tiejun Wang, a spatial ecologist in the Department of Natural Resources at the University of Twente in Enschede, the Netherlands, has worked in Foping for two decades.

Sheng-guo Fang, a researcher at Zhejiang University in Hangzhou, China, has studied the morphology and genetics of the Qinling pandas and notes that the recessive genetic trait is worthy of investigation, but cautions that there could be other factors at play.

Fang and colleagues have found that while most of the Qinling pandas appear to be normal black-and-white animals, many of the region’s pandas do have touches of brown in their chest fur.  To the researchers, this suggests that there could be and environmental factor in the Qinling area, such as the climate or a particular environmental chemical, that affects one or more pigmentation genes.  Fang notes that the Qinling Mountains “have shaped brown subspecies of other mammals, such as the golden takin”.  Genetic research of the Qinling panda population also indicated that there is much diversity in the population easing concerns of inbreeding.