Sichuan China;  On October 11 at  Shimian a major step in diversifying the gene pool among wild giant pandas took place. Tao Tao, a captive born panda who turned two on August 3, 2012, was released into the wild. 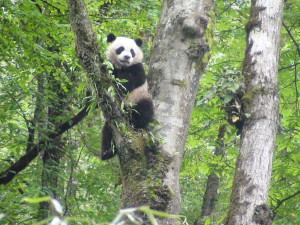 This carefully planned reintroduction program began with the selection of Cao Cao to be the first female in the program. She was placed in three separate natural enclosures and gave birth to Tao Tao without human intervention same as a wild female panda would. Contact with humans was limited and fear of humans encouraged. When entering the enclosure with Tao Tao the keepers all wore panda costumes covered in Panda feces in order to mask the human smell so he would not become sensitized to human features.

Tao Tao has been wandering farther away from Cao Cao and two is generally the age when cubs finally leave their mother.

Huang Yan, Vice Director of Research for The China Conservation and Research Center for the Giant Panda  (CCRCGP), who is in charge of the reintroduction program, stated, “This is a significant event for both captive and wild pandas. By following Tao Tao and his life in the wild, other captive pandas may one day also be released into the wild thus helping this beloved and endangered species grow.” Tao Tao’s genes will help the wild pandas in this region of China.

Tao Tao’s movements will be monitored with a special GPS collar for safety,  and for gathering important research data about the lives of the solitary animal. Pandas International a non-profit based in Littleton, CO supplied the special GPS collar.

Suzanne Braden, director of Pandas International, (www.pandasinternational.org), said,  “This is a very important day because we’ve taken a huge step in beginning a program that hopefully will increase the numbers of wild pandas from the current estimate of only 1,600.” Braden, also commented that endangered means we have time but extinction is forever and that’s why this day is so critical.